Revised, with new maps, and a new proposed alignment:

This proposed high-speed line (HSL) complements the reactivation of the old line Aaachen-Richterich-Simpelveld-Valkenburg-Maastricht, opened 1853 and closed 1992. The reopened line would form part of the proposed urban-regional metro Aachen (S-Bahn Aachen). The HSL would provide a fast service between the city centres: The Aachen urban region has 540 000 inhabitants, with 240 000 in Aachen itself. The city of Maastricht has 122 000 inhabitants. The HSL would also connect to other intercity services from Aachen and Maastricht. 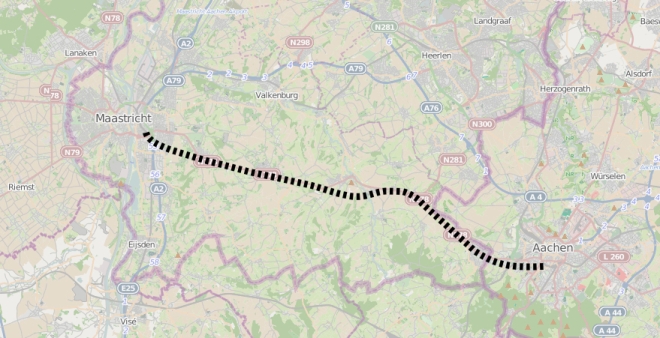 The proposed line uses part of the alignment of the former Limburgsche Tramweg-Maatschappij (LTM), a steam-tram line from Maastricht to Vaals, opened in 1925. East of Gulpen, the new HSL would have a similar alignment to a possible Gulpen – Vaals – Aachen link, an urban-regional line (S-Bahn). Combined construction of both lines would be difficult: the best option is a direct HSL, together with reactivation of the old line Maastricht – Aachen, with urban-regional services via Valkenburg.

The new line would start at Maastricht Station, on the right bank of the Maas (opposite the historic city centre). The high-speed line from Hasselt would approach the station from the north, in tunnel under the Maas.

The proposed HSL from Hasselt…

Maastricht station would need redesign as a through station: at present, it is a terminal station for trains from the north. Immediately south of the station area, the rail line is constricted: the prominent Church of the Sacred Heart blocks expansion of the rail area here. Nevertheless, there is sufficient room for extra tracks, if the road in front of the church is closed. If the new platforms begin at the station building, there is also sufficient room for a grade-separated junction at the south end of the station. The road tunnel Akerstraat / Scharnerweg can probably remain in use.

South of the station, the new line to Aachen would drop into tunnel, and turn east. With the construction of the A2 motorway tunnel through Maastricht, an exit line under the Akersteenweg is no longer possible. The new line would pass under the A2 just as it enters the tunnel section, at the Europaplein junction. 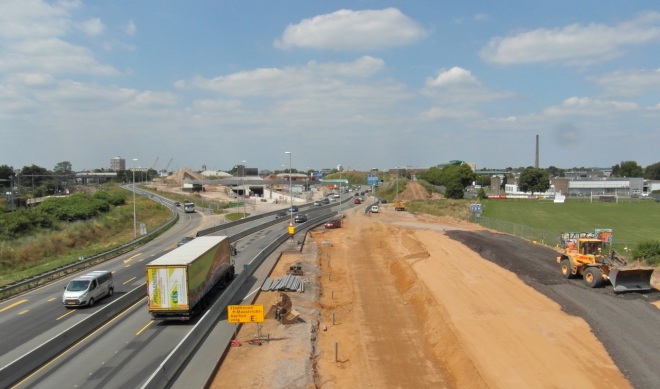 It would then pass through Heer, at first in a cut-and-cover tunnel (under the sports field). This neighborhoud consists of an old village street, surrounded by low-rise housing. Because the terrain slopes upward, the line can enter a bored tunnel about 500 m from the motorway, minimizing local demolition. With the southern alignment, in green, a bridge over the motorway might also be possible. 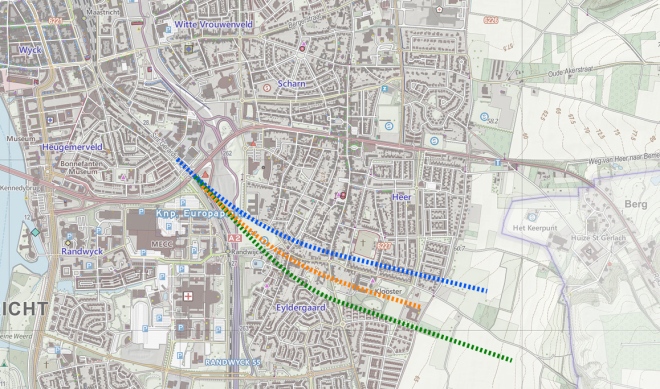 As it leaves the built-up area of Maastricht, the line would climb 80 m toward the plateau, surfacing just east of Cadier en Keer. The 5-km tunnel would be comparable with the Tunnel de Soumagne at Liège, which has an identical function. (It carries the Liège – Aachen HSL out of the Maas/Meuse valley, to the plateau on the eastern side).

Between Cadier en Margraten, the HSL alignment would approximately parallel the N278, on the south side of the road. The main road climbs about 40 metres, in the 3 km between the two villages. Although the road through Margraten is straight, and just wide enough for a cut-and-cover tunnel, the best option seems to be an alignment south of the built-up area.

Between Margraten and Gulpen, the road falls 70 metres. The old steam tram avoided this slope, by diverging to the south, crossing the Gulp valley on a viaduct at Euverem, and entering Gulpen from the south-west. The new line will not enter Gulpen, but it would use a similar solution. It would cross a descending viaduct near the campsite at Euverem, and cross the Gulp valley. The valley floor is at about 105 m altitude. It would enter a tunnel, under the ridge between the Gulp and Geul valleys.

The line would emerge from tunnel south-west of Partij, and pass south of Partij and Wahlwiller, to rejoin the alignment of the N278. In theory, a single base tunnel is possible, from Maastricht to the Geul valley at Partij. It would be about 15 km long.

From Partij to Vaals, the alignment would be identical to that of the possible Gulpen – Vaals – Aachen link. The constraints are the same, and the best solution is to follow the N278. The line would pass just south of Nijswiller, with a tunnel under the low ridge between Wahlwiller and Nijswiller. It would rejoin the route of the N278, at its junction with the N281.

From here to Vaals, the constraints include a narrow section of the valley (Selzerbeek stream, Senserbach in German), and historical building such as the Benedictine Abbey Benedictusberg and the old centre of Lemiers. The N278 runs in a straight line, the gradient is acceptable: a rail line is possible beside the road, or in some places under the road. The road through Lemiers, which avoids the historic village core, is wide enough for a shallow tunnel.

From Lemiers, the road climbs 40 m up the flank of the valley, in less than 2 km, to the edge of Vaals. The old tram line followed an easier gradient, nearer the Selzerbeek, on the north side of Vaals. For high-speed trains the gradient into Vaals is not a problem, and the line could go in shallow tunnel through the village (thin blue line). The main street does curve in Vaals itself, which might restrict speed.

The alignment in Vaals would also be dependent on the route eastwards, to Aachen Hauptbahnhof (6 km due east). One option is to follow the main road – Vaalser Strasse, Bundesstrasse 1 – at least as far as the junction with the Amsterdammer Ring. The main road dips and curves, as it crosses the Senserbach (barely visible here), and curves again about 400 m east. However, there is enough open space is enough to allow the line to emerge from tunnel, and enter another tunnel (red dotted line), under the houses of Vaalserquartier. Another option is a long tunnel (white dashed line) under the southern half of Vaals, which is about 20-30 m higher than the main road. This tunnel would join the alignment of the freight rail line Aachen – Montzen – although this line does not go to Aachen Hauptbahnhof, and another connecting tunnel would be required

Near the western cemetery (Westfriedhof), the Vaalser Strasse crosses the Aachen – Montzen line. Here, all variants would enter a tunnel – the exact alignment and portal depends on the alignment through Vaals. The tunnel would surface close to the main station (near Weberstrasse). Because of the terrain, the built-up areas, and the crossings with roads and rail lines, a single long tunnel from Vaals might be the best option. 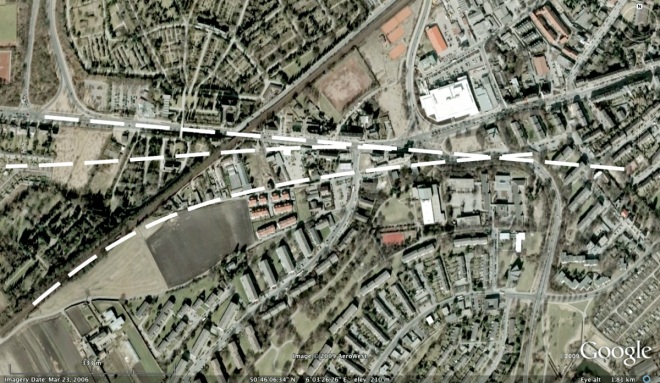 The exit point of the tunnel is a problem, in this densely-built urban area. Aachen Hauptbahnhof also has a restricted location, which could be improved (on the west side), by moving the northern boundary of the track area (red line), and re-aligning some of the tracks (blue lines). 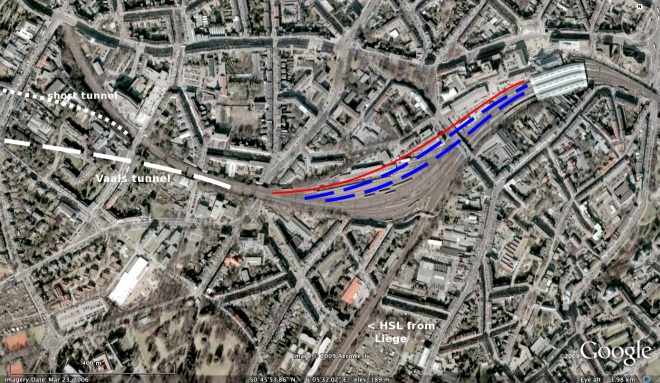 The total length of the line from Maastricht to Aachen would be about 32 km. Although the line is too short for very high speeds, the section Cadier – Vaals could be aligned for 150 km/h to 180 km/h. A journey time of under 20 minutes is certainly feasible.

Hasselt (75 000 inhabitants), is only 27 km from Maastricht, in a straight line. At present there is no service between them, but a regional tram service is planned, using an old railway line. From Hasselt Belgian Line 34 runs to Liège via Tongeren. It turns south at Bilzen (‘Beverst Junction’), and the disused Line 20 continued to Maastricht, via Lanaken. The planned regional tram will run on a separate alignment to Bilzen, and then over the former Line 20 into Maastricht.

The proposed HSL is qualitatively different from the light-rail project, but it does not exclude service of intermediate stations. In fact, the HSL can avoid the old Line 20 entirely, leaving it free for a new regional rail line via Lanaken. (The HSL would however be incompatible with the planned parallel tram line through Diepenbeek, since space is limited).

For the HSL, the line out of Hasselt Station would be upgraded, with a grade-separated junction for the line from St. Truiden (Line 21). The curve at the edge of the built-up area would be improved. From there to Bilzen, Line 34 can either be upgraded as a four-track line (Ausbaustrecke), or a parallel HSL could be built directly alongside it it. Either way, all level crossings must be replaced, probably with a cut-and-cover tunnel though Diepenbeek. East of Diepenbeek, the proposed HSL to Liège would diverge, turning south toward Tongeren.

At Bilzen, the HSL would diverge from Line 34. It can not simply follow the old alignment through Munsterbilzen and Eigenbilzen, because that is too sharply curved. The section through Lanaken is also too far north.

The new line would therefore run south of Line 20, at the edge of Munsterbilzen, and probably in tunnel under Eigenbilzen. The typical sprawl around Flemish villages (lintbebouwing) makes some demolition inevitable. At Munsterbilzen, the line can be cut into a low ridge, limiting the effects.

Beverst Junction is at about 50 m elevation, and the terrain then slopes upward to the plateau above Maastricht, at about 80 m elevation. The HSL can probably run on surface on this plateau, south of Gellik, on an almost straight alignment. It must first cut through Eigenbilzen. Even if the HSL uses the old cutting through the village, some houses must be demolished for a new curve, to avoid the Albert Canal (alignment shown in blue). A tunnel just south of the village centre seems preferable: it can also take advantage of the terrain, since the village is higher than the land on the west side. A southern alignment (in white) would also avoid the castle ruins west of the village, and most of the forest at Groenendaal. 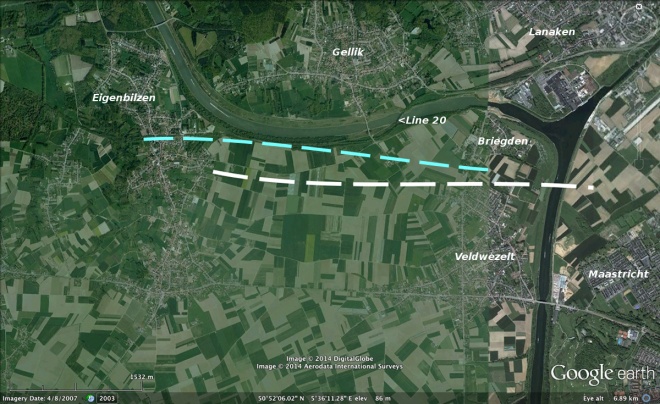 Between Briegden and Veldwezelt, the new line would cross the Albert Canal on a bridge. The west bank is about 15 m higher than the east bank here, so the line would continue on viaduct.

North of the built-up area of Maastricht (Oud-Caberg), at about 60 m elevation, the line would enter a long tunnel. This 4-km tunnel would curve slowly, to align with Maastricht Station on the opposite bank of the Maas. It would descend 40 m from the portal at Oud-Caberg, in order to cross the river – the river bank is at 45 m in Maastricht. This alignment takes it under a waste landfill, but at that depth, there should be no problem with subsidence.

The tunnel would pass under the Zuid-Willemsvaart canal, and the river Maas, emerging just north of Maastricht Station. The alignment must take account of redevelopment north of the station, and some demolition may be required. From the river to the platforms, over 1200 m is available, for the tunnel to climb to the station.

From Maastricht, trains might continue on the proposed HSL to Aachen. An alternative for that project is an express service on a re-opened Maastricht-Aachen line. The Hasselt – Maastricht line would also connect with the proposed Maas valley high-speed corridor to Venlo and Nijmegen.

The proposed high-speed line would have no intermediate stations. The new alignment Bilzen – Maastricht would be about 16 km long, and the whole line about 30 km, station to station. Journey time Hasselt – Maastricht should be about 12 minutes.