This fast Schwerin – Wismar rail route is part of a series of proposals for the triangle Hamburg – Berlin – Szczecin. Read first the introduction: New rail infrastructure north of Berlin.

The route would include upgraded existing lines, and some new alignments. It would connect to the proposed Lübeck – Rostock high-speed line (HSL), and has little logic without that line. 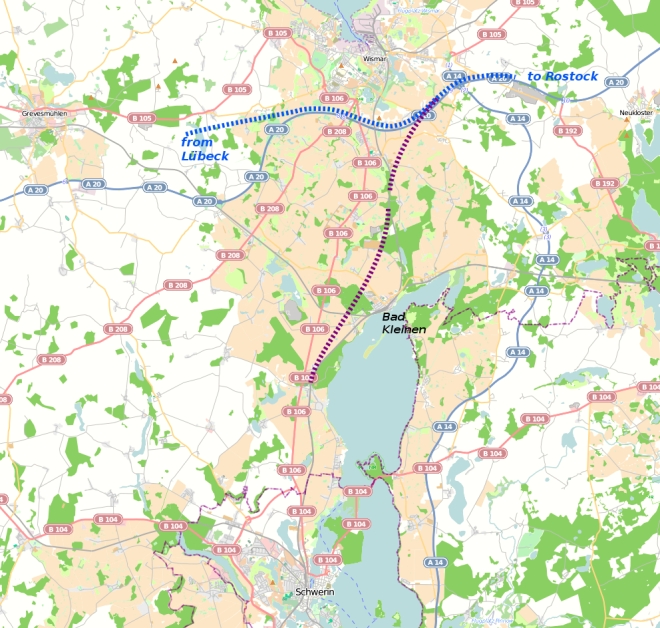 Primarily, the upgraded line would link Schwerin and Rostock. With an alternative Lübeck – Rostock alignment south of Wismar, that would be more obvious. Nevertheless, the line would also be the logical route, for any high-speed trains from Berlin to Wismar via Schwerin.

The existing rail line Schwerin – Wismar is 32 km long, and relatively direct. For historical reasons there is a railway junction at Bad Kleinen (population 3700), with the single-track line from Lübeck, and the line to Rostock.

The large junction station at Bad Kleinen, image by Bk1086 under CC 3.0 licence… 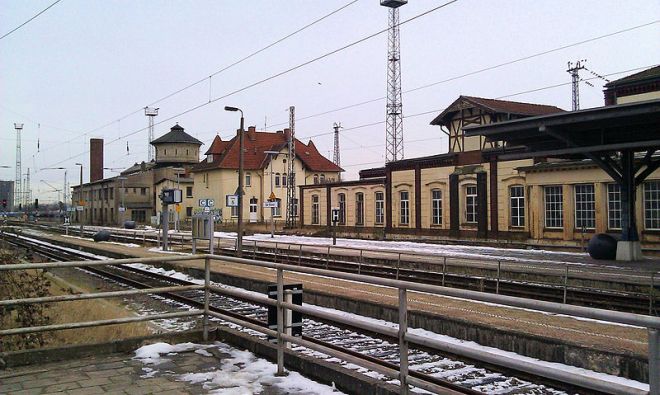 Schwerin (population 95 000), is built around several small lakes, west of the larger Schweriner See. The rail line from the south curves to avoid the lakes, and then passes through the city centre, where the alignment is often confined between buildings. Upgrading of the line in the centre is not considered further here.

North of the main station, the alignment has more room for expansion and upgrading. A new alignment around Bad Kleinen would begun near Lübstorf station, and run on higher group west of Bad Kleinen. (This new line can also have a branch toward Grevesmühlen, for a high-speed route to Lübeck). 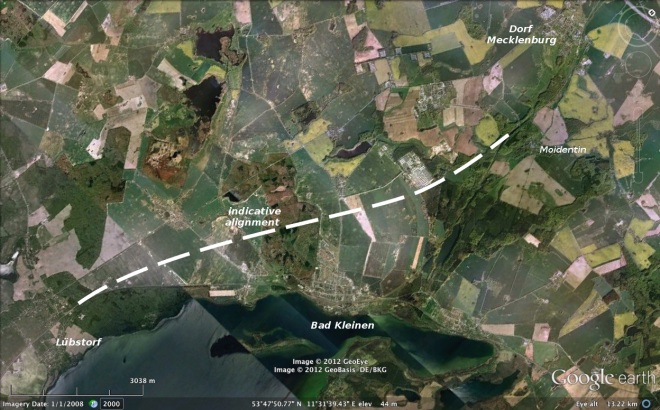 The new section could rejoin the existing alignment at Petersdorf station (which is in fact nearer to Moidentin). The alignment beyond this point depends on the alignment of the Lübeck – Rostock HSL. The version initially proposed would run at the edge of Wismar city centre, via a tunnel from the south-west. It would have a new station, at the road viaduct over the railway (Dr.-Leber-Strasse / Rostocker Strasse).

In that case, the logical option is an additional south-to-east viaduct with platforms, at that new station. Trains from Schwerin would then use the same exit line towards Rostock, as trains from Lübeck. To reach the new station, the line between Petersdorf and Wismar would be doubled and upgraded. 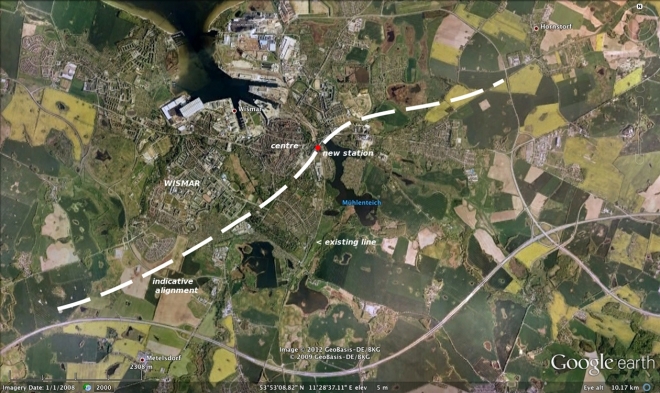 On the other hand, if the Lübeck – Rostock HSL runs south of Wismar, a new curve is needed, northeast from Petersdorf. It would turn toward the Autobahn A20, and then cross it to join the HSL bypass of Wismar. This option is shown in purple, on the overview map. In this case, only some fast trains would serve Wismar, terminating there. The existing line from Petersdorf into Wismar would be doubled and upgraded.

Doubling and some upgrading of the Schwerin – Wismar line, would be justified in itself, for more intensive regional services. However, upgrading for high speeds, on a 32-km line, would not be justified solely to serve Wismar. The proposal is essentially a bypass of Bad Kleinen, with a link to a high-speed line toward Rostock. As part of a wider regional network of high-speed lines, this would make sense. Regional trains from Wismar could run via Schwerin to Ludwigslust or Hagenow, or on a new route to Lüneburg.

This high-speed bypass at Wismar (HSL) is part of a series of proposals for the triangle Hamburg – Berlin – Szczecin. Read first the introduction: New rail infrastructure north of Berlin.

This is not a proposal for a separate line, it is an alternative route for the earlier proposed Lübeck – Rostock HSL, without a station in Wismar. Because it bypasses Wismar, an alignment along the Autobahn A20 is an option for this variant. The connection from Schwerin would also be easier, following the existing line through Bad Kleinen.

A fast Wismar – Rostock service would still be possible, with a relatively short connecting line from Wismar to the A20. Trains from Lübeck could use the HSL and enter Wismar from the south, although the route is less direct. The main disadvantage is that Wismar would have no through fast services.

As described earlier, the line from Lübeck Hauptbahnhof to Grevesmühlen would be upgraded as Ausbaustrecke, with some new sections. From Grevesmühlen, a new section would run east, to join the A20 near Barnekow. It would cross a lake, and avoid some ridges, with local elevation differences of about 40 m.

South of Wismar, the HSL could be built alongside the Autobahn, but the curved alignment would limit speeds. The new line might have a separate alignment between Barnekow and Kreuz Wismar (shown in orange), and possibly between the junction and Nevern. (A completely separate alignment to Rostock, entirely north of the A20, is also possible).

The new line from Lübeck would have a west-to-north curve (shown in blue), onto the existing Schwerin – Wismar line. A new exit line, toward Rostock (in green), would run from the outskirts of Wismar – passing around Dargetzow to join the A20 alignment near Kreuz Wismar. 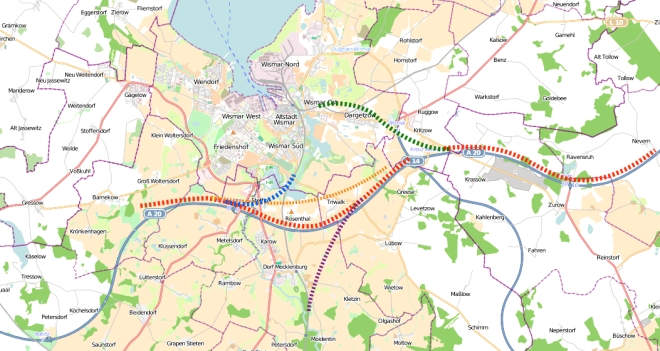 There would also be a connection from the Schwerin direction onto the new line (in purple), for fast Schwerin – Rostock trains. It could follow the existing line through Bad Kleinen, or it might bypass that junction.

East of Nevern, the HSL could follow the A20 to Heiligenhagen, and then turn away toward Rostock. The junction with the existing single-track line from Wismar would be east of its crossing with the B103. The alignment inside Rostock needs upgrading, as mentioned earlier.

The new line would be approximately 115 km long, from Lübeck to Rostock. With a separate rail alignment Wismar – Rostock – not along the A20 – it would be slightly shorter. Length is not the main factor in the choice of Lübeck – Rostock alignments. An alignment along the A20 might be shorter if it avoided central Wismar – but that advantage might be lost, by following the curves of the Autobahn. More important is that a bypass of Wismar is easier to build, than a central-area tunnel.

A line to Stralsund is a logical extension of the HSL to Neubrandenburg, part of a proposed HSL route to Rostock. It would shift the main route to Greifswald and Stralsund – rerouting it through Neubrandenburg, to maximise connections. 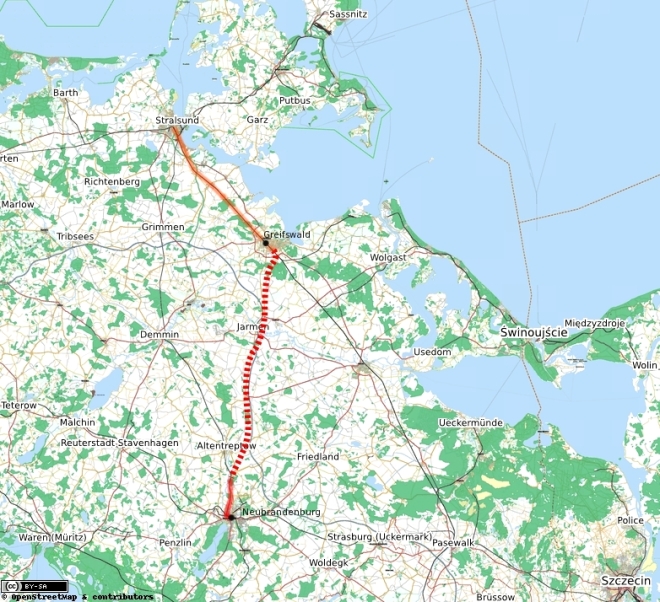 At present there is one route serving both Greifswald and Stralsund, the line via Prenzlau. This is the Stralsund branch of the former Berlin-Stettiner Eisenbahn. The whole line is double-track and electrified. The alternative route to Stralsund is the original route of the Berliner Nordbahn, to Neubrandenburg via Oranienburg, and then the single-track section via Demmin.

A direct line Neubrandenburg – Greifswald, partly along the A20 Autobahn, was proposed earlier by Markus Gröbe. In that version, however, Berlin – Rostock trains would not be rerouted through Neubrandenburg. The alignment proposed here is almost identical: any new line to Greifswald would probably follow the A20.

Fast trains to Greifswald would use the existing line out of Neubrandenburg, doubled and upgraded. The new alignment would diverge about 9 km north of Neubrandenburg, and turn toward the A20. From near junction 30, the new line would run alongside the Autobahn, for about 22-25 km. 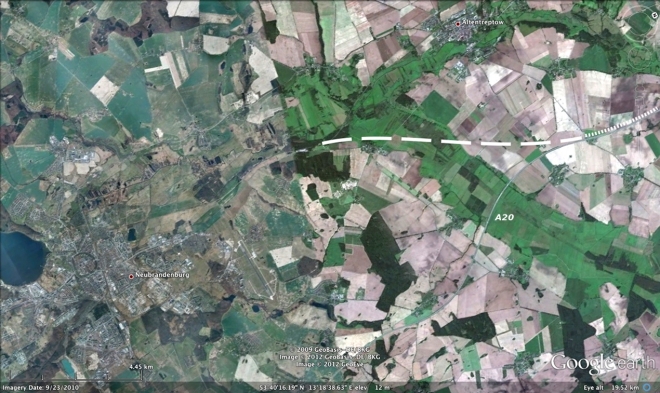 Near Jarmen, the alignment of the Autobahn is curved, so the HSL could diverge even before junction 28. From there it would turn toward the existing main line Prenzlau – Greifswald, joining it about 4-5 km from the station. The shortest possible alignment would run in straight line, passing east of Jarmen, to the edge of the built-up area of Greifswald. The new line would be about 63-65 km long, from station to station, with about 13-15 km of that on upgraded existing line. 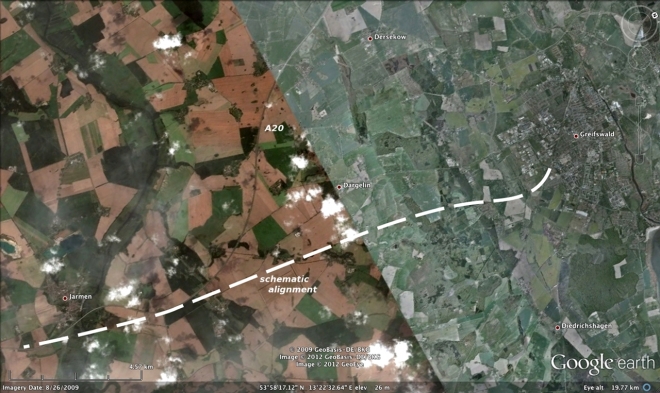 North of Greifswald, the existing line is almost straight, the terrain is almost level, and the line can be easily upgraded. Very high speeds are unnecessary, since it is only 31 km to Stralsund.

Greifswald (population 54 000), and Stralsund (population 58 000) are the regional centres (Oberzentrum) for about 350 000 people, in the north-east corner of Mecklenburg-Vorpommern. (The central function is split between the two, normally it would be one larger city at that level). Via the new route, Greifswald would be about 195 km from Berlin Hauptbahnhof, and Stralsund 225 km. Journey time Berlin – Stralsund should be under 90 minutes.

At Stralsund, the high-speed corridor would connect with the line to the island of Rügen. Under the DDR, that line was upgraded as access to a new ferry port (Sassnitz-Mukran), for traffic to the Soviet Union. The port is still a ferry terminal for Baltic services, but passenger traffic to Rügen is primarily for tourism. For that reason, some trains from Berlin could reverse onto the Rügen line, as at present. Geographically, however, Sassnitz is a logical terminal for an east-west high-speed corridor through Rostock and Stralsund: more on that later.

The Eisenbahn- und Verkehrsgewerkschaft recently published proposals for rail services north of Berlin, in Brandenburg and Mecklenburg-Vorpommern. They are primarily proposals for a service pattern on existing lines, upgraded in some cases, with some re-opening of closed sections. The proposals here go further, and include a restructuring of the network, in the triangle Hamburg – Berlin – Szczecin.

The railways of Prussia were strongly centered on Berlin. North of Berlin, population density was always relatively low. There were no coal fields or major industry: the radial lines to the coast ran through forest and farmland. Consequently, the tangential infrastructure is weak, and rural branch lines were often unconnected. After the Second World War, the region was divided between West and East Germany and Poland, cutting many lines. Each state concentrated investment on its own north-south infrastructure, neglecting most Prussian radial lines. German reunification did not lead to major investment in the region, and Polish-German rail links have a low priority in both countries.

In Brandenburg and Mecklenburg-Vorpommern, most rural brach lines were closed. The surviving lines, and the secondary radial lines, have infrequent services, despite their proximity to Berlin. The region is also losing population, with extreme losses in some towns. (Schwedt lost a third of its population since the 1980’s, and became an example for urban population decline policy).

Apart from Schwerin, the capital of Mecklenburg-Vorpommern, there is is no major regional centre between Berlin and the Baltic coast. The DDR had a separate administrative unit here, the Bezirk Neubrandenburg with over 600 000 inhabitants. However, the small city of Neubrandenburg lost its function as administrative centre after reunification, and shrunk from 90 000 to 65 000 inhabitants. It is still the regional centre for about 350 000 people, and the network proposed here would make it the main rail junction between Berlin and the coast.

Despite the low density of population, the region is suitable for restoration, expansion and intensification of the rail network. Most towns and villages have, or had, a station. The landscape is characterised by low ridges and many lakes. At the edge of the Mecklenburg region, the relief can be a local obstacle, with ridges at over 100 m, and lakes at near sea level.

There are no current plans for major rail infrastructure, north of the line Hamburg – Berlin – Szczecin. Even the restoration of the radial lines in Berlin itself is incomplete, 20 years after reunification. There are some non-official proposals: Markus Gröbe proposed a high-speed route to Rostock and Stralsund. The Berlin – Hamburg line itself was upgraded as Ausbaustrecke, after the abandonment of the Transrapid maglev line along the A24 Autobahn.

Most of the currently operating rail lines, in Brandenburg and Mecklenburg-Vorpommern, are affected by those proposals. A few branch lines, however, would remain much as they are at present.